I think that ThinkComposer could have done better, if it picked a little more memorable name...

It appears to be an abandoned project by Nestor Sanchez, after he turned it into an open source project, in 2015.
The fact that the project is no longer being developed is a REAL SHAME, because it came very close to being the best mind-mapping tool on the market, in my humble opinion.

While I was searching for a mind-mapping / diagramming tool, I installed the ThinkComposer and created several diagrams, after I watched the tutorials I could find on the website or on the YouTube.

The basic approach is that the User can assign a shape to a Concept - and can then assign a number of modifiers ( some pre-packaged, or custom ones ), as icons - which represent different aspects of the Concept. ( I may have forgotten the exact terminology used ).

For instance, if you are creating a diagram that represents a process that includes different people with different functions and different level of expertise, you can create a concept 'Person' and associate it with a gender-neutral icon of a person.
The concept then becomes available as a master shape, which you can drop anywhere in your process.
What makes ThinkComposer stand out, is that it also provides ready-made graphic MODIFIERS,
as little icons that can describe - visually, the person's function in that process, and also something it calls 'markers', which can provide the hierarchical position of that person. This is very easy to use, as a drag-and-drop.

All this is ready-made in ThinkComposer, and the user can also - very easily, use CUSTOM icons, as the modifiers.
( This is equivalent to the Custom Icon sets for Data Graphics in Visio, which - unless you are quite an advanced Visio user, is not advisable to do, for the faint of heart ).

What is astonishing to me, is that a SINGLE developer, with obviously very limited resources, got this right, something that an ARMY of Microsoft developers, with vast resources, couldn't do.
Visio CAN be used in a similar way as the ThinkComposer, but it takes quite advanced knowledge of
its inner workings, in order to accomplish something that ships out of the box with ThinkComposer.

Unfortunately, I had to abandon ThinkComposer because it was not stable and reliable as a production tool. Some things would work some times, some times not.
Some of the terminology used is convoluted and the interface is peppered with too many options, that can and do become too confusing to a user.
As a software developer, I can recognize that these are all indicators of the stages of development of a software project - prior to being polished for the final user.
It was a very ambitious project based on very good principles, and for a single developer, an almost incredible accomplishment.
I just wish that Nestor finds the time and a sponsor to continue with the development, or that some company with financial means would take over this project and continue its development, or just adopt its building principles and create a usable product.

This is a nice piece of software. While the user interface is a little cluttered, it's versatile (it can produce mind maps, flow charts, even argument diagrams a la Rationale or Argunet), seems stable, and exports to a variety of formats. It's also free and open source, which is always nice.

Make it for Mac please!!

One of the best apps in the field. Big selection of diagrams, highly customizable. It is a bit cluttered, but not too much. Too bad it wasn't actively developed since 2015... 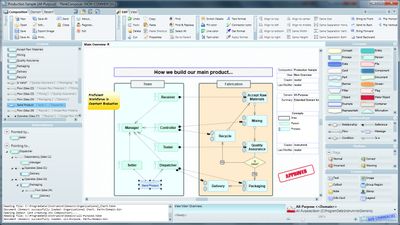 Our users have written 5 comments and reviews about ThinkComposer, and it has gotten 36 likes

View all
ThinkComposer was added to AlternativeTo by nmarcel on Jul 18, 2012 and this page was last updated May 13, 2022.