What is Tap Forms?

Tap Forms is a very powerful organizational tool designed to help you keep track of all your life's most important information.

Use Tap Forms to track your inventory at work and manage your household items at home. Great for insurance and accounting purposes! It's even great for managing your holiday gift lists.

If you're a master chef in the kitchen, you can use Tap Forms to manage your entire library of delicious cuisines.

Are you a movie buff but you have too many movies to keep track of? That's easy, since Tap Forms can help you categorize, rate, and manage your entire movie collection. Never forget who you've lent your movies to ever again.

And with built-in support for iCloud, now you can keep all your Tap Forms data on your iPhone and iPad in sync with your Mac. So when you're out at the store trying to remember if you already own a copy of The Terminator, just look it up on your iPhone using Tap Forms for iOS!

Speaking of looking up stuff, Tap Forms now has Saved Search Rules. With Saved Search Rules, you can create any number of filters that helps you find and sort through thousands of pieces of information as quickly as you can tap a button. It's your data just the way you want, in an instant!

I have to admit I am a bit disappointed in TapForms. I used the version 3 for quite a while, input a lot of effort into creating a lot of databases (Home Inventory, Application List, PS3 Games, etc) but in the end it failed on me - a lot. Eventually I hoped my woes would be resolved in version 5 so I upgraded right away, however, it still failed on me. So in version 3 I had major sync issues. I had to constantly reset the sync process in order to get my data across my devices. This was a pain, until I finally decided to use it only on my Mac and have the iOS versions for viewing only, but with limits as it did not always show all my items. Then came version 5, with a new sync upgrade. I thought this resolved all my issues to find that when I imported the database, all the attachments and pictures were lost. So all that hard work I had was gone, over. I tried multiple times to import the database with no luck. Eventually I decided to go back to version 3 where to my surprise also lost all the attachments... so I am basically giving up on it for now. Hopefully new versions will come to fix major issues, however, to input much effort to build a database to see all that work gone out the window is something I really do not wish to see again, so I will be very cautious if ever going to use this software again.

Despite this, I think it is the closest to what Bento was providing, and for me Bento was superb. So I still give it a 3 star rating for the ease of use, intuitive design and great functionalities.

Update: With TF5 the developer has practically removed all the issues I had with syncing between devices in the past version. Since this was a great let down for me on previous version, it was a crucial improvement in my opinion.

Hi TVDN. I'm the developer of Tap Forms. I think the issue you had with the images not transferring over could be solved by disabling iCloud sync and choosing the "Keep a Local Copy" option in the old version of Tap Forms. Once you've done that, all the images will be copied to the local device. When you create a backup file to migrate to Tap Forms 5, then all the images will be there now. So importing into Tap Forms 5 should work just fine then. If you need further support, please email me at support@tapforms.com. Thanks! Brendan.

Hello Brendan, thank you for the reply. First, TapForms is a great application. I congratulate you on building it and the hard work into making it better. I have set TF5 to make backup of the database every time I close now. I decided to bite the bullet and re-do some of my databases from scratch. There is no better option out there (cudos to you). TF3 had serious problems of sync but now in v5 you apparently have fixed them. This for me is fantastic! The sync problems I had was a terrible let down in v3. Although I have not performed a migration yet to verify if the databases integrity is maintained, I am confident that TF5 will not let me down whenever I will need to. Cheers!

Hi TVDN. Excellent! And thanks for your kind words!

And you can always contact me at support@tapforms.com and I'd be happy to help you with any Tap Forms issues at any time.

Said about Tap Forms as an alternative

brendanduddridge Tap Forms imports Bento templates in one step. It re-creates all your Bento layouts and imports all your records, including photos and file attachments.
Positive comment • over 3 years ago • as an alternative to 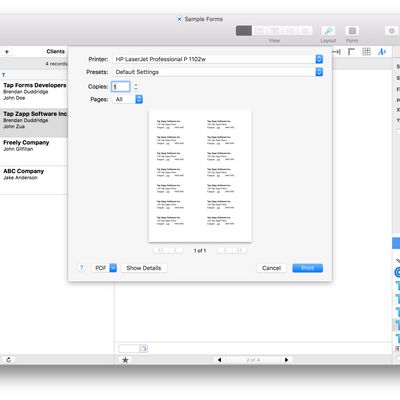 Our users have written 1 comments and reviews about Tap Forms, and it has gotten 12 likes

View all
Tap Forms was added to AlternativeTo by helenaglory on Sep 7, 2013 and this page was last updated Jan 27, 2021.