The most powerful and lean mouse gesture program for Windows.

StrokesPlus is essentially a StrokeIt alternative, but with much more flexibility. It allows you to assign actions based on mouse gestures to automate or simplify many common tasks.

It´s very lightweight, only using 250-400k of memory while running in the background. StrokesPlus utilizes Lua scripting for the actions giving you a great deal of power and flexibility.
Show full description ▾

StrokesPlus was discontinued in 2016, as the author Rob Larkin switched to developing StrokesPlus.Net. See https://www.strokesplus.com/forum/topic/1165/version-2864

This is the best and more powerful gesture app I have seen. The author is a genius.

While StrokesPlus requires at least a mild understand of coding to program commands, once you configure it the way you like, it runs perfectly: No .NET framework requirements. No crashing. Super-fast (it literally uses 1 MB of RAM or less). Very configurable. Excellent gesture recognition. Doesn't require administrative privileges to run.

I switched from JustGestures after JustGestures lost all my settings and started crashing randomly. JustGestures wins for ease-of-use, but that's all it has over StrokesPlus. StrokesPlus runs lighter, faster, has better gesture recognition, more options, the ability to add modifiers to gestures, etc.

StrokeIt can't compare to either one of these products.

I rate StrokesPlus 4/5 stars. The interface for programming gestures is great, but having to script commands (even simple ones like sending key combinations) seems a bit archaic to me. As someone who majored in computer science, I still found myself lost at times in their documentation. For instance, it never mentions that on the acSendKeys(keys) command, you need to put double quotation marks around the variables on the inside. So if you want to send "bob", you have to use acSendKeys("bob"). Omitting the quotation marks results in a somewhat confusing error. Also, a lot of the commands (like minimize window) require manually programming x,y coordinates. The way around this is to use acGetMouseLocationX(), acGetMouseLocationY() instead, but this should again be simpler to use.

That being said, it's extremely powerful once you understand how it works, and it works phenomenally. Simplifying the scripting end of it would easily boost the score to 5/5.

I agree with pretty much everything you've written here. I never intended to make S+ for the average user (by average I mean non-programmer!), and being free means I get very little in return...and everyone knows making a program user-friendly is the most expensive part of a software application!

However, you don't need to use acGetMouseLocation, each action is exposed to several variables that are passed in, including the start and end coordinates of the gesture (gsx, gsy [for gesture start X and Y]) and gex, gey (gesture end X and Y).

Not that it changes the heart of your review, just wanted to clarify that little bit =)

I've also updated the snippets in the Available Actions drop down, so when you click Insert, the sample code is functional, e.g. acSendKeys now inserts:

S+ is still an advanced interface where scripting experience is almost necessary, but you're not the first to feel confused by the previous function templates inserted; I hope this change makes using the actions slightly easier.

Good alternative for the Easystroke program on linux.

Being an advanced computer user is not enough in order to use this app. You also need the knowledge of a scripting language. If you don't have it, don't waste your time trying this app because the "developer" didn't bother to make it any easy or user friendly for you.

You are pretty much right. I spent months of personal time every day working just to have it function and be very open to allow people to make it do whatever they wanted. But I never focused on having a simple mode or area for just a everyday person; I always had it in my mind that this would be for folks with scripting knowledge. In the end, it takes time to develop software and keep it working over the years as Windows is constantly changing things. And while I've received some donations, they've never been enough to even cover the domain and hosting costs since I started about 6 years ago. I know that sounds like a lame excuse, and to a degree it is.

I am slowly working on a new version which will use .NET and have a much more user friendly interface, but I will also be charging for that version for the reasons above.

Very capable gesture application, i used strokeit for many years but find strokesplus to be even better at identifying the gestures, the LUA scripting makes it very dynamic, the author is active and listen if you have suggestions. 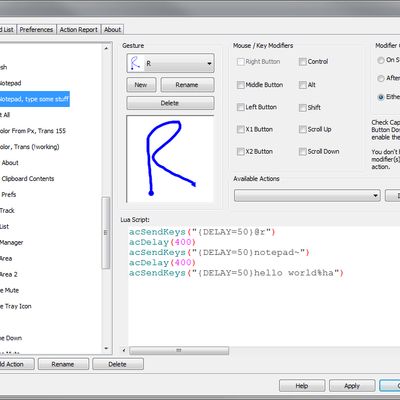 Our users have written 5 comments and reviews about StrokesPlus, and it has gotten 85 likes

View all
StrokesPlus was added to AlternativeTo by CapersL on Dec 24, 2011 and this page was last updated Jan 18, 2022. StrokesPlus is sometimes referred to as Strokes Plus, S+.