What is Space Engine?

Space Engine - a real-time 3D space simulator, procedural universe generator and visualiser. It lets you explore the universe in three dimensions, starting from planet Earth to the most distant galaxies. Areas of the known universe are represented using actual astronomical data, while regions uncharted by astronomy are generated procedurally. Millions of galaxies, trillions of stars, countless planets - all available for exploration.
Show full description ▾

It's an excellent space simulator and it's free to use.
Unfortunately, they don't have an official version for Mac or Linux - only for Windows, but they are planning to make it available for both platforms.

Excellent alternative for paid software that does the same as Space Engine does.
Just something I need to mention... Since it uses the OpenGL library, why not porting it to Linux? Linux is lacking some software!

Great way to explore the universe.

The aplication is still in beta but fully functional aside from some crashes.
I think its the worthy "AlternativeTo" Celestia since its made by the one of the original developers.
OpenGL library its well used and show off nice graphics, textures and cool effects for the stars and black holes.
There is a relaxing music that adds to the contemplative nature of the deep space.
But the crown goes for the terrain displacement added to the extrasolar planets, where you can fly by the mountains, rivers and the like.
The Linux/OSX version its not yet ready but planned. Much work has been done for stability and the overall presentation on the art assets that add to the awesomeness of the aplication.
To sumarize, I think that SpaceEngine is great tool worth a try by everyone that like to learn/explore the universe or the average student who have curiosity about the matter.

I just dont understand why the dev do not used a engine as Unreal, Unity or Godot for the job. That would accelerate the development and fix the stability of the aplication. But I'm sure he has his good reasons...

Fly away from earth at 100 ly / s and explore close stars, or other stars in the milky way, funk it, go full speed to others galaxy and visit them, visit their stars, their planet or comet or whatever ... and plus, you can even approche a black hole and feel the vertige at the edge where space-time itself start to show its character.
Compatible oculus, dome/projector combo, cross 3D if you don't mind look at your screen like a chameleon ...
And on top of all of that, the music is relaxing ...
A few click away from taking am amazing journey across our universe. 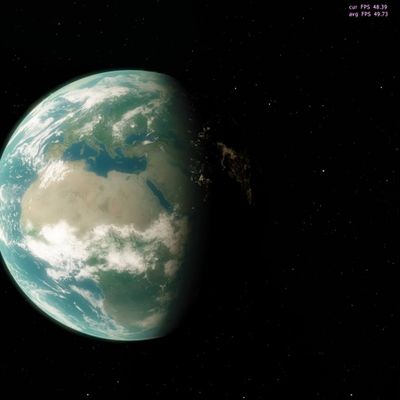 Our users have written 5 comments and reviews about Space Engine, and it has gotten 33 likes