Softonic is a website that offers downloads for free software and games. It includes over 50,000 programs for Windows, Mac, Linux, Palm, and more.
Show full description ▾

softonic is biggest software and app discovery. based in barcelona spain. Founded in 1997, owned by softonic international. Softonic has over one hundreed million users. softonic delivers more than 4 million downloads per day. Softonic is available on Dutch, Spanish, German, French, Italian, Portuguese, Chinese, Polish, Arabic, English, Japanese, Bulgarian, Swedish and other languages. First softonic was founded in 1997 as a file oriented download website. It was called shareware intercom. The company also offered monthly CDs of its software library for users. Softonic was listed as the best place to work in spain. We had 100-290 employees. In July 2016, Softonic announced a partnership with business software platform Crozdesk
Also visit https://apkgameapps.com/

Softonic is a fantastic website for those who are looking for sotware. Not only the write great reviews about the programs, but they add alternative, comunity reviews, opinions, number of downloads, etc. There you will be able to find software in different platforms (Linux, Online, Windows, Mac, etc.), and the best thing is that appart of the program-review site, they have links to forums, questions answers or even to a blog for software news. I totatly recomend it. 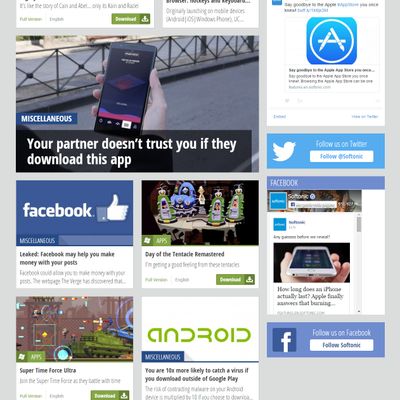 Our users have written 2 comments and reviews about Softonic, and it has gotten 37 likes