Simplify3D provides 3D printing software that streamlines the process of 3D printing and allows you to create better 3D prints. Simplify the process, improve the results!

ALL-IN-ONE 3D PRINTING SOFTWARE
No need to use multiple software applications for your 3D printer. One powerful application allows you to import, manipulate, repair, slice, preview, and start printing a 3D model in a matter of minutes.

-Access hundreds of pre-configured profiles that are optimized for your printer.
-Adjust as few or as many settings as you wish.
-Print over USB or with an SD card.

THE FASTEST 3D SLICER
Slice your 3D models in seconds, not minutes, allowing you to quickly and easily perform multiple iterations in order to achieve the best quality.

-Slice complex models in seconds.
-Preview your 3D part to identify potential areas of improvement.
-Adjust settings, slice, and repeat as many times as you need to!

SMART SUPPORTS
Support material that is fully customizable and easy to remove. Automatically generate support material based on overhang angles, then add or remove supports as needed.

-Customize the placement, size, and angle of support material.
-Snap off supports easily without damaging your part.

-Protect your part from blobs and defects using the Ooze Shield and Prime Pillar.
-Print the part in one material and the support structures in another, allowing you to use dissolvable filament.

-Quickly manipulate where parts are placed to make the most of the build plate.
-Control whether to print continuously layer-by-layer or sequentially.
-Change settings such as infill, support generation, layer height, and temperature for each part as needed.
Show full description ▾

Once you've set up everything it works really well.
Working with material and printer profiles is a bit awkward to me.
Maybe I don't get the concept of this software how to manage material-profiles on various printers. I found some way to handle this, but it feels a little "wrong", or as I said "awkward", because it isn't very intuitive changing between various machines, their dedicated material profiles etc..

What gives me a bit headache, is that there's now almost 2 years without any bugfix or feature release, since the last version (4.1.2) was released in Apr. 2019.
From what I've heard the company promised free updates and upgrade on V5 within 1 year, for those who purchased a license for v4.1.2. Now there's almost 2 years over, and nothing happened so far, and also no else information than "we're working & testing on it", which makes many users lose their trust in this company.
The new release of v5 now really has to be "ambitious" as they recently announced in their forum (but again, NO release date).
This makes the software a bit "behind" the others, since e.g. there's Cura with constantly releasing updates with improvements like advanced and experimental features like "tree supports" etc.. Also the new PrusaSlicer is out now, which works quite well and is also improved constantly.

The program works great when you can use it but there DRM is broken, when you update the software or have to transfer it to a new computer you can expect a couple days of downtime while waiting on there support to manually deactivate your old license.

The software is great but there DRM and linux support is poor. 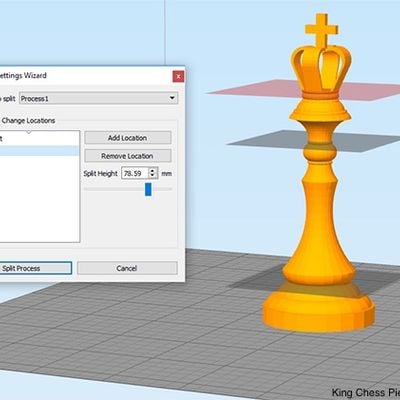 Our users have written 3 comments and reviews about Simplify3D, and it has gotten 7 likes