Public Source Code - all source code is available for public audit, this include front and back end code.


True Zero Data Knowledge - because we also encrypt sender and recipient there is zero information third parties can learn if our server ever get compromised.


Compatible - send and received emails from other services that don't use encryption.


Protected - send an encrypted email to other email services using unique secret phrase you shared with recipient. Recipient able to reply back securely without creating an account.


No shared data - we serve only files located on our server, so your visit to us stay confidential.


Do Not Track - all images and outside resources are disabled by default, so sender can not learn if you opened email.

So you're looking for a privacy-oriented, encrypted email service? Great. Go for:

... depending on your level of familiarity with encryption. If in doubt, go for Protonmail or Tutanota. Unless you need a calendar. Then go with Mailbox.org. Although... Tutanota promise an encrypted calendar in the first half of 2017... and Protonmail have a calendar (of what kind) as "Planned". Up to you.

Don't go for SCRYPTMAIL because:

All of this tells you: it's a one man show, probably a hobby project set up by a guy who wishes to compete with the services I mentioned above (and some others). That's great, but I don't know him, and chances are you don't either, I don't know where he's been or how good/trustworthy Sergei is. The code isn't open source, so I can't have a look myself to see what he's done, he's a one man "team", he doesn't stand a chance against determined adversaries and he's stopped updating a long time ago. Put your private data there? Sure, and put your left tit in the wringer. 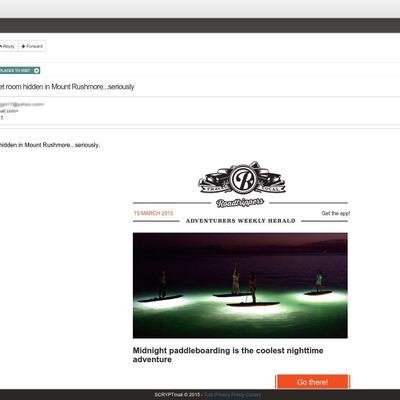 Our users have written 1 comments and reviews about SCRYPTmail, and it has gotten 10 likes

View all
SCRYPTmail was added to AlternativeTo by scryptmail on Mar 31, 2015 and this page was last updated Dec 8, 2019.