Robocode is a programming game where the goal is to code a robot battle tank to compete against other robots in a battle arena. So the name Robocode is a short for "Robot code". The player is the programmer of the robot, who will have no direct influence on the game. Instead, the player must write the AI of the robot telling it how to behave and react on events occurring in the battle arena. Battles are running in real-time and on-screen.

The motto of Robocode is: Build the best, destroy the rest!

Besides being a programming game, Robocode is used for learning how to program, primarily in the Java language, but other languages like C# and Scala are becoming popular as well.

Schools and universities are using Robocode as part of teaching how to program, but also for studying artificial intelligence (AI). The concept of Robocode is easy to understand, and a fun way to learn how to program.

Robocode offers complete development environment, and comes with its own installer, built-in robot editor and Java compiler. Robocode only pre-requires that a JVM (Java Virtual Machine) to exist already on the system where Robocode is going to be installed. Hence, everything a robot developer needs to get started is provided with the main Robocode distribution file (robocode-xxx-setup.jar). Robocode also supports developing robots using external IDEs like e.g. Eclipse, IntelliJ IDEA, NetBeans, Visual Studio etc., which supports the developer much better than the robot editor in Robocode.

The fact that Robocode runs on the Java platform makes it possible to run it on any operating system with Java pre-installed, meaning that it will be able to run on Windows, Linux, Mac OS, but also UNIX and variants of UNIX. Note that Java 6 or newer must be installed on the system before Robocode is able to run. 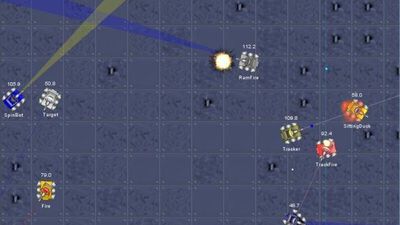 Our users have written 0 comments and reviews about Robocode, and it has gotten 16 likes