What is Registry Workshop?

Registry Workshop is an advanced registry editor. It is a perfect replacement for RegEdit and RegEdt32 which shipped with Windows.

In addition to all the standard features, Registry Workshop adds a variety of powerful features that allow you to work faster and more efficiently with registry related tasks.

With Registry Workshop, registry editing becomes more safe than ever before. All changes except changing key permissions can be safely reversed (even registry replacing and importing), using multiple levels of Undo. You don't need to worry about making mistakes when editing registry.

Whether you are an advanced user who needs to edit and modify your registry to remove trojan, virus, and spyware entries, a system administrator who needs a safer, more efficient tool to maintain your company's PCs, or a software developer who needs to quickly manipulate registry keys and values during system development, Registry Workshop has the tools that you need. 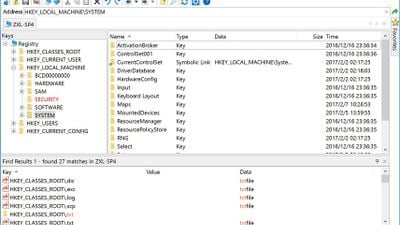 Our users have written 6 comments and reviews about Registry Workshop, and it has gotten 38 likes

Registry Workshop was added to AlternativeTo by realnabarl on and this page was last updated .

While it's true that Microsoft provides a built-in app for editing the Windows Registry (aka Regedit), it's a very basic app that basically hasn't been updated or enhanced in roughly 20 years. It's pratically a relic. Though, to be fair, a barebone, no-frills and no-nonsense environment is sometimes best when dealing with highly complex and sensitive data like the Windows Registry. In that sense, Regedit is still a tool worth keeping in the toolbox, so to speak.

Registry Workshop is everything that Regedit is not.

When it comes to advanced and high-powered navigation of the Windows Registry, Registry Workshop is light years beyond any other app out there. Tasks that would take hours of tedious repetitive edits in Regedit can be accomplished in minutes with Registry Workshop. Much of this is thanks to a much more intuitive interface as well as an abundance of features that are too numerous to list here. However, to be fair, this combination of great power and many nuances can be dangerous -- you can do some serious damage to Windows with Regedit if you're not careful, and you can do even more damage 10x faster with Registry Workshop if you're not careful or move to fast or are unfamiliar with the Registry. With that said, this app, if you used properly, is still a dream app for system administrators and everything they always wished Regedit could/should have been.

Key features such as a powerful search and advanced bookmarking make navigation greatly faster and helps keep you on track and from getting lost in the infinite forest that is the Windows Registry. Additionally, the app keeps a running history of all edits you make that serves as a deeply multi-level "undo" and is even persistent between sessions. So, for example, even if you accidentally delete critical data without noticing and close the app and shutdown your computer and only upon returning hours later do you discover your error, you can just open the Registry Workshop's history pane navigate to the errant edit(s) and restore them as if they never happened. [In fact, on one occasion I accidentally deleted a tree of dozens of critical keys and values that I could have never reconstructed without having first backed them up to a .reg file (which I obviously hadn't) and I had even closed the editor and was preparing to reboot would which would have resulted in a messy System Restore at best or a clean install of Windows at worst... but, just a few clicks later I had reopened Registry Workshop and undid my errant edits via the history pane and the crisis was totally averted.]

On the downside? The overall app could be a bit more cohesive. Its many features, while individually intuitive and rich, could be a little better organized throughout the app as a whole. It was more of an issue when I was first learning to use the app whereas I'm just used to it now. Also, the interface is a bit outdated and clunky here and there. Don't get me wrong, the last thing an advanced app like needs is flashy high-end skinning and hogs system resources in a way that far outweighs any aesthetic benefit, but still, it could use some touching-up. Other than that, I can't think of any negatives. The app has never crashed or behaved abnormally during editing; it's been 100% reliable and truly robust in all the years I've been using it.

I tried all competitors, including free ones like Registry Finder, but this is the only one without bugs and reliable Undo/Redo and other advanced features. The bad: expensive price.

Even after 10 years this is still the best Registry Editor for power users. The ability to see your history of changes and undo them has saved me many times and the Search is the most powerful I have ever used.

Sure, it's not free, but I don't think you will find a better registry editor than this. Certainly better than the one made by Microsoft 20 years ago or so, which is still found in the latest Windows version (10) in which it doesn't even work properly, (the search tool etc.)

it's not marked as free; it's free with limited functionality

Free with limited functionality means you can use it but not have access to all the features. This is literally a trial version for a commercial product.