https://pastes.io is a simple and efficient pastebin for mainly code to be distributed neatly and efficiently across the web. It is a website where you can store any text code or snippets online for easy sharing. The idea behind the site is to make it more convenient for people to share large amounts of text online.
Show full description ▾

No registration requiredYou can use most of the features in this app without registration.

I like the pastebins with the social implementations. This is one of them, for example, where you can easily see the trending and latest pastes made. Which on some of these sites, like this one, you have it occupied almost entirely void of code-related pastes. That is, about 80% of the content posted publicly are a range of things from dark web links(that im scared to goto) to structured news aggregated lists, to hilarious, borderline insane messages to god knows who. I have fun checking this one every once in a while. Be smart though, dont click on malicious links.

...Oh, and i guess yea, this site is ok for storing source code. If you're a total stick in the mud 🐔

-A review by Rando "you can't buy me, but i creep on your info/sales pages, and sometimes bless you with a bit of Rando magic!" (RandoReviews Tech Services LLC does not encourage "creeping" and we only keep this guy around cause he hijacked our netflix password, so that we would rely on him. Also hes Janet's step-son, so yea kind of one of those things. He also assumed the name of the company as his own name, but, as long as Janet is here and there's new seasons on netflix, he stays.)

"Come be a man and say that to my twitter page!" -Rando

Said about Pastes.io as an alternative

Morads Its simple to use and no required to login with simple Home and many features.
Positive comment • about 1 month ago • as an alternative to
Pastebin.com 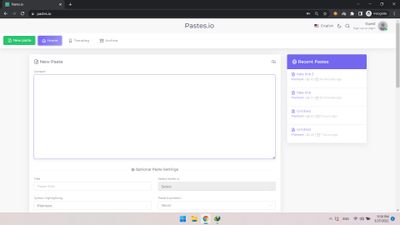 Our users have written 2 comments and reviews about Pastes.io, and it has gotten 2 likes