Oolite is a space sim game, inspired by Elite. Among Oolite's several similarities to its inspirational source, the gaming experience is enhanced by the context set in Elite's original manual, and the accompanying novella, The Dark Wheel. Almost every aspect of the game can be changed by using simple, free graphics packages and text editors.
Show full description ▾

Oolite is a phenomenal tribute to the original Elite space-trading game. It can be played in a form that is almost identical to the original game or, thanks to hundreds of mods ("OXPs"), it can be customised to the hilt with the addition of extra weapons, extra equipment items, extra ships, extra missions, extra space stations and extra planets, amongst other features, but be careful which OXPs you choose, as, while some add enormously to the game's ambience and playability, others may feel like they detract from it. Adding extra space stations or making space lanes more crowded may seem cool but could make your journey from the system arrival point to the main space station a lot slower, as the in-system jump mechanism is 'mass-locked' by all your fellow travellers.
Another risk is that having too many OXPs installed may bloat the game to the point of unplayability. I recently experienced momentary freezing when under attack from umpteen enemies
Adding a cool weapon may be fine if you're the one using it, but less so if all the NPCs end up with it, and it may seem great to be able to fly your favourite spaceships from certain other genre franchises but you may also find that the designs clash with Oolite's established styles.
On the subject of graphics, these are generally improved over the original (especially with some of the OXPs) but the hyperspace and docking/exiting graphics are rather naff still (the Android mobile game, Alite, does these much better).
All in all, a great game but can be slow, and be careful how you mod!

I am old enought to have enjoyed the original Elite and this is it brought up to date. 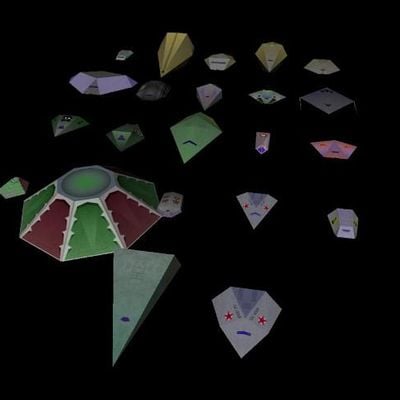 Our users have written 3 comments and reviews about Oolite, and it has gotten 10 likes