ObjectDock is an animated dock for Windows that enables you to quickly access and launch your favorite applications, files and shortcuts.

ObjectDock can also automatically hide itself when not in use and will reappear when you move your mouse to its position.

Apply effects, customize the color, size and position, plus more with ObjectDock!

The program is no longer updated. Last version, 2.20, released in 2016, can be still bought from the official website

First of all, I have rewrote my review on ObjectDock, since the first time I first posted it here. If you came here only for the free version, skip this paragraph and go to the next one. I am adding this up here, for the paid ObjectDock Plus. I decided to get the paid one for W10, due to a specific bug the free one had for me, and I have to say it is great. It seems to be really lightweight and if anything it is cheap to buy. I have been using it for over a year now and seems quite stable, with the only bugs being some really rare crashes (had 2 of them for this 1+ year I have been using it) and the Stacks docklet having a peculiar bug, where if you open a Stack docklet and while it is open you click another docklet, the stacks will remain stuck open, until you restart objectdock. Obviously the only reason I am even bothering with Plus, is because it works still with Stacks docklet. Adding it a 5th star, as Plus has really been great for me and I have have a great time using it.

Free Version
As I was looking for a free replacement for Rocketdock, I realized there are just not many free docks to be found, if any. Most of them have been discontinued and Nexus is too basic, lacking the all important Stacks feature (for free).

Objectdock has been something I have used many years ago, but then as time passed I found myself using Rocketdock instead. I do not remember why that happened, but I remember I never paid for Objectdock and yet I used to use it. Back in time, that made me look into older versions and as it seems my memory was right; version 1 of Objectdock is free !!! By now though, I found that you can actually get a free v2 of ObjectDock on MajorGeeks. Ignore that MajorGeeks marks it as Shareware. You just download it from one of the two MajorGeeks download links (the Author's site link does not work, since probably it was removed from there) and it will be the free version =)

Like the Plus version that I use, the free v2 seems to be working perfectly with Stacks v2 ! The installation of stacks is exactly the same as Rocketdock (place StackLib.dll in the main folder and Stacks folder in the Docklet folder), and it works like a charm.

If you require proof, you can check some screenshots here that I took with the free version of v1: http://imgur.com/a/pHghC

As a sidenote, I mention on the first paragraph that the reason I got on W10 the Plus version, is because of a specific bug both v1 and v2 free versions had, at least for me. The bug for me is that if I place the bar on the left side of my screen and make it to autohide, when I move the mouse pointed to the leftmost side of my screen, it will either not open the drawer at all, or it will glitch out and start open and close the drawer in a fast pace. It feels as if in order to open it the mouse cursor needs to be a couple pixels away from the left end of the screen. Mind you, I have Dual Monitor setup, so that might be another reason. Afar from that very specific bug that exists only on the free version, the rest are exactly like the paid version. I do not really use or care for the features that the Plus version offers, or the extra drawers you can get with it. So if it either does not bother you or you do not get this bug, then the free is perfect for you =)

I love Rocketdock & am usually much more for freeware, especially projects like Rocketdock. Unfortunately I always had way too many problems running it, it would hog tons of resources, and it lacked one major feature that I found absolutely essential- tabs! Not to mention the ridiculously HUGE amount of awesome skins available for Objectdock, when the selection for Rocketdock ones leaves a lot to desire. Objectdock allows me to have TONS of docks all over my 3 monitor desktop, which I constantly use & have managed to set up to utilize in a way I could never with Rocketdock. I have well over 100, maybe close to 200 even, different software installed, making it a pain to find anything otherwise. With Objectdock, I have a dock for each category, such as "graphics editing" (photoshop, Gimp, After Effects etc), another for fractal software, another for media-based software (media players mostly, or media-manipulation like file-tagging or dvd-burning), you get the picture. It's nice because you can have a combination of tabbed docks and quick-launch (regular docks, like the one in Rocketdock, for instance) docks on your desktop with no issues.

My number one favorite thing about it? Virtually no lag, virtually no major resource consumption. Even with tons of docks.
My second? The epic skins. (found at their Wincustomize website mostly)

Yes, there is one fatal flaw. Unfortunately Stardock has STILL not fixed it, which makes me very angry, considering I'm a paid customer & the feature I pay for doesn't work correctly. The problem is that when I have a tabbed dock, it doesn't function how it's supposed to. Most people will want to have the name of the software/app of the icon you're hovering on to display the name above it, when you do. This is supposed to be how it works, actually. Otherwise you have to pretty much just remember what every icon is. It doesn't work, because after a certain amount of time of it running, it tends to just stop showing the icon titles when you hover over them, because what happens is the text is appearing underneath everything else you are doing. This renders the feature completely useless, and unfortunately, the only alternatives are either a really good memory (or ugly icons that are extremely obvious), or displaying each title underneath each icon, which takes up so much room as to render it pointless. Honestly, I think it's something that's been overlooked FAR too long, and the only thing keeping this software from being 5 out of 5 stars! I had to rid my main monitor of my awesome 7-tabbed dock, and replace it with the Quick-launch dock because that still strangely works the way it's supposed to. Anyways, luckily having about 9 docks running, including 2 docks which have 2 tabs in each of them, results in absolutely no extra drain of computer resources like RAM & CPU.
It's still something to consider, if you're looking into buying it.

All in all, I would still recommend it, because of the beautiful skins, the awesome smoothness of it running, the fact it's not a resource hog & that you can use most of the docklets available around the web with it. That includes the same ones for Rocketdock. Currently there are really great icon stack docklets (around 3 or 4 different ones), there's a calendar docklet, a master volume docklet, safely remove device docklet, power/battery docklets, RSS feed docklets, clock docklets, system tray docklets, and a few cool built-in docklets for Objectdock on it's own. In fact, it has a pretty nifty folder docklet built in that lets you browse things in a folder menu directly from it. There's some great running indicators & other features, like start button, recycle bin, system tray, running windows, all app windows, minimized app windows etc.

I rarely, if ever, pay for software, but I wanted ObjectDock badly enough to pay for it. Now I feel lost without it, and even though it took a little time getting used to remembering to use it in the beginning, now I hate being without it & feel a little disoriented. I'm just so used to the convenience of all my sexy, pretty, organized icons/shortcuts in places I can easily find them. Oh, I'd still totally recommend 100% to use Rocketdock's site for finding awesome dock icons. They've got a HUGE amount of user submitted icons (and docklets!) & I've found one of the coolest steampunk artists there, who makes TONS of steampunk icons all the time for docks & other stuff.

I'd recommend giving OD a shot, specifically with the tabbed feature, if you can.
I'll be uploading some screenshots to show some great examples of what you can do, too. ^_^ As far as docks go it is by far the best. Tabbed docks, drawers, tabbed drawers. Heavily editable. The only problem I could say is if you just want the tabs it might be a bit heavy although it's not insane. Beware that when used with Dexpot it can have some issues pop up. All of these generally get resolved easily by turning off dexpot again. Sometimes having a rainmeter skin near it can also be an issue sometimes although rarely.

Check the comparison page for differences in features between free and plus versions. The features in Rocket Dock cover some that are included only in the pro-version.

What's on My Workstation 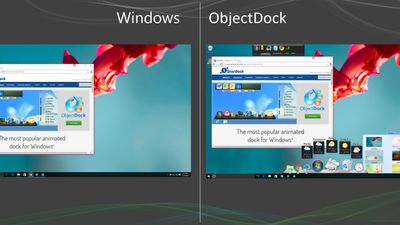 Our users have written 4 comments and reviews about ObjectDock, and it has gotten 60 likes

View all
ObjectDock was added to AlternativeTo by Mogelfar on Mar 13, 2009 and this page was last updated Jul 1, 2021.