MediaShout provides more than 50,000 ministries worldwide with the presentation tools they need in a streamlined, intuitive workspace. From basic worship presentations to intricate multimedia experiences, communicate Life’s Most Important Message to any size audience. Now available on PC and Mac platforms. Download a 30-day free trial at our website.
Show full description ▾

Our church was running Mediashout 3.5 and could not afford $500 to upgrade to 6.0
After researching and test installing on my home pc i went with OpenLP for free.
OpenLP is comapreable to EasyWorship for ease of use and well laid out.
Great software, only missing two features I hope are added later.
Missing motion backgrounds
(I don't use them they are distracting)
Missing the ability to change backgrounds on every slide in a slideshow - but can use different images in a group
(I just use images which and add the text in with a graphic editing program like photoshop or GIMP for a free option)
Other than that i have found no issues with this software.
I rate is very high as i can do anything i need with it.
Quick tip, if using it also install VLC player freeware.
This alows openlp to play any video type you can image.

Our church has recently switched to media shout. After using easy worship, we decided this program would better meet our needs. I LOVE how you are able to customize features more than Easy Worship. This program gives you a more "Professional look"

We were a MediaShout customer for many years but finally have given up on this software. We tried many times to resolve issues and were patient with the support team but could not continue to deal with the problems and difficulties this program caused our church. MediaShout stops working and crashes multiple times during editing of the slides. Customer service was not good, never answered the phone even during the customer service hours and took a long time to call back. The tutorial videos were not helpful at all. The software does not have a user-friendly interface in general but is especially unusable to people who have no experience with the program.

MediaShout updates were sent out and caused the software to completely crash. We had to call customer service and were told we would have to completely reinstall the system with a new access code. The technician had to be involved to make sure we did not use up an extra licensing code when reinstalling. Each time the software crashed the MediaShout support team gave a different reason for the cause of it crashing. We were told the program was cloud-based, but it was so complicated and confusing to set up the cloud-based system we gave up and were not able to utilize that feature. Steep learning curve transitioning from MediaShout 5 to MediaShout 6. Opening the MediaShout program each day took a long time to load. MediaShout crashes when we try to add certain types of media into the presentation such as PowerPoint or images. Overall, the program was extremely difficult to use, customer service was not helpful at all and the program caused many difficulties for our church to run smoothly. We later switched to one of MediaShout's competitors. 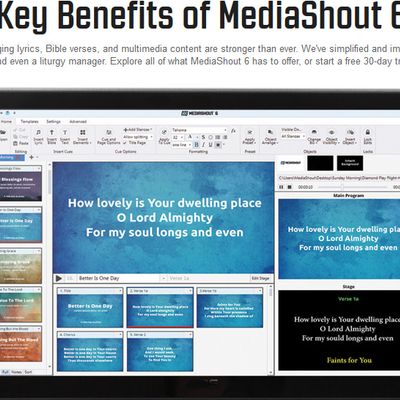 Our users have written 3 comments and reviews about MediaShout, and it has gotten 7 likes