This should go down as one of humanity's greatest achievements. When one has had a taste of the sweet nectar of multi-dimensional modelling, traditional spreadsheets will seem a bitter poison of a primeval era.

The math that drives spreadsheets doesn't fundamentally change, even after decades - and thus one can still derive utility from such a finely-aged program.

This god-tier application moved Steve Jobs to deliver flowers to the developers when they initially released it for NeXTSTEP. The problem was that Lotus, in their folly, continued to promote 1-2-3 while putting negligible resources behind Improv until it was too late and the world was cursed with the perpetuation of Excel and Co.'s lesser model.

Why such effusive praise? Some would argue that using something so classic should migrate to lesser, yet modern, spreadsheet applications. Such suggestions are mired in folly and, certainly, unfamiliarity with Improv's glory! Namely: 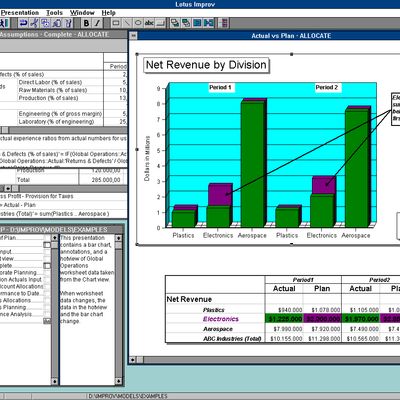 Our users have written 1 comments and reviews about Lotus Improv, and it has gotten 1 likes

View all
Lotus Improv was added to AlternativeTo by superluminar on Apr 26, 2018 and this page was last updated May 29, 2020.