Listango was born out of a simple idea...

I was sick of having several hundred bookmarks on my notebook, work PC, iPad and iPhone and never being able to find any of them when I needed them. All I wanted was a simple tool that would allow me to quickly save and organize my bookmarks online, accessible from any of my devices. So I searched around, but the tools available were primarily for reading articles offline or “social” bookmarking. I’m not interested in either of those things.

So I contacted my friend Steve and we started work on Listango in May 2012. The site is self-funded and is developed entirely by Steve and I. We believe some people will find it useful.
Show full description ▾

The official website is unavailable, and the last update on their Twitter/Facebook account is from 2014, but the extension can still be downloaded from the Chrome Web Store.

I created my page on Listango and organized my links. I like it.

I've been looking for a Diigo alternative, since they took away the useful Lists feature and replaced it with a poorer feature and made it premium to boot. (I might be able to get by without Lists, but it was a poor move that didn't give me confidence in the direction and attitude toward users Diigo was adopting.)

From an appearance perspective, this was promising, good, clean interface. The best I've seen on services like this. I was not thrilled about the lack of tags and only having lists to sort through, but thought I'd give it a shot. Unfortunately, I noticed there's not even a Search function, or if there is I'm missing it. Having only lists and sublists as the sole organizational function was not ideal enough, but I can't imagine not even having a Search option in a particularly populated account.

Adding a bookmark is also not a great experience. The only option you have with the bookmarklet to add a bookmark is choosing Read Later or a dropdown menu to pick which list you want to add it to. As soon as you select a list it inputs it and closes, so here's hoping you don't misclick! I also don't like that you have to go to the bookmark item itself to add a description. I'd prefer being able to do that from the bookmarklet interface.

I like lower feature services that are selective in their functions, but do it well, I don't need much, but this is just a bit too bare-bones for me. I can't imagine it being efficient or practical to use once you pass a number of items.

(Making this a comment rather than a review, because I didn't use it for more than an hour or so. I prefer using a service for a bit longer before leaving a proper review, but I'm moving on from this service.) 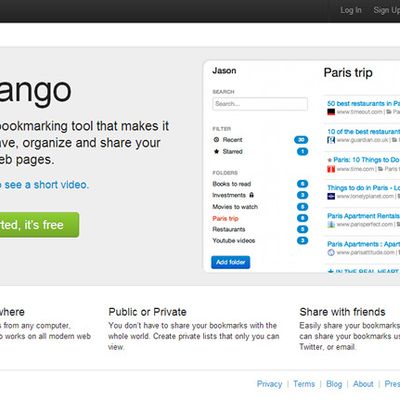 Our users have written 2 comments and reviews about Listango, and it has gotten 13 likes

View all
Listango was added to AlternativeTo by SebastianPrzepiorski on Mar 26, 2014 and this page was last updated Nov 12, 2021.