Lingoes is an easy and intuitive dictionary and text translation software.
It offers lookup dictionaries, full text translation, capture word on screen, translate selected text and pronunciation of words.
Lingoes sits in the system tray and becomes ones pop-up dictionary and thesaurus, as well as ones text and URL translator both from and to English, French, German, Spanish, Italian, Russian, Chinese, Japanese, Korean, Swedish, Thai, Turkish, Vietnamese, Greek, Polish, Arabic, Hebrew and more than 80 other languages. Included in its bag of pop-up tricks are conversion tools, calculators, abbreviations, word origins, slang, idioms and much more. Entire dictionaries may be freely downloaded; and realtime look-ups at several well-known online dictionaries and translators is built right in.
Show full description ▾

The program is no longer updated. Last version, v2.9.2, released in August 2014, can be still downloaded from the official website.

I used bunch of offline dictionaries including babylon,stardict, translateit ,sdictionary .This program is the best program i met so far. Reasons for that is :
-All dictionaries are free including most popular babylon dictionaries,
-Easy to install.It works as exactly as babylon Ctrl right click combination

I have used this program for a couple of years. I use English dictionaries most of all. Others are also good. One can select specific dictionaries. It can automatically translate from the clipboard or even when you select a word. The text fields are very colorful. 3 or more colors are provided. It works fast and consumes little resources. This is abandonware, but I found a torrent with all the dictionaries in existence for it. Very nice.

I just download Lingoes V2.7.5 (newest version so far) from there. After the installation, it launchs Lingoes.exe but it takes forever to start. By the way, I can't end lingoes.exe in Task Manager either, always get error process id isn't available.
Anyone has the similar problem ?

I notice that, for example, Google Translate is more popular around here than Lingoes. And that's fine...

...but the reader should know that there's a Google Translate downloadable thingy for Lingoes... so one could have Lingoes and STILL have the most popular Google Translate running within it.

For whatever that's worth.

Remember, too, that Lingoes is more than just a translator. That, in fact, is what I use it for the least. For me, it's the dictionaries, thesaurus, currency converter, and some other stuff. That said, the translation part is way cool, too.

I'm actually the one who submitted Lingoes to this web site... even though I'm not its author or have anything to do with the company. It's just that I throught Lingoes was so much better than CERTAINLY all the freeware alternatives, and pretty much even most of the commercial ones, that I figured everyone should know about it.

I, personally, couldn't live without it. But I admit that it does take a little time figuring out which dictionaries and other stuff to download; then precisely the order they should be in, and then exactly how to configure every last little thing. I'm still tweaking it a little to get everything just right. It's really something, though. I actually used it to replace, believe it or not, a full commercial version of Bablefish. It's that good.

Indeed the best free offline and online translator, with many free premium dictionary from Longman, Websters, Collins,... and Wikipedia, Google dict. Also support English-Vietnamese translation with colorful, easy to read layout too. Super good as an alternative to Babylon commercial software which cost a lot.

This is the best integrated Offline and Online Translator I ever met! 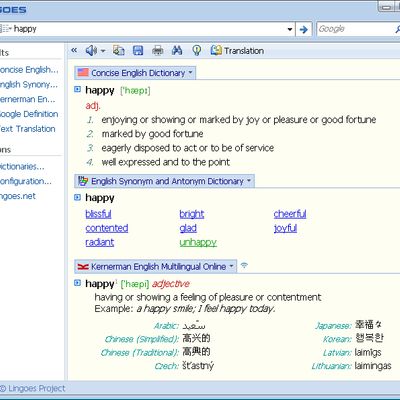 Our users have written 8 comments and reviews about Lingoes, and it has gotten 102 likes

View all
Lingoes was added to AlternativeTo by DesElms on Aug 9, 2009 and this page was last updated Jan 27, 2021. Lingoes is sometimes referred to as Lingoes Translator.