LightZone, though simple compared to some other opensource products, is very capable of post-processing images to create amazing results. When gaining first impressions it, a person may see that it draws more inspiration from photo editors compared to others. It boasts itself as the first program ever to feature masking for RAW images. When compared to its counterpart lightroom, this statement holds true (LightZone Released: 2005 Lightroom: 2007). Masking exists in this program but in a nodal format instead of brushes. The ease of freely arrange the adjustments in the sidebar gives the user more room to experiment with the order of precedence for the effects to take place.

For those of you who are trying to find a way to say goodbye to iPhoto, Lightzone has a good intuitive-enough workflow for adjusting and editing your photos. It will not do the intake step - for that, I use Shotwell, which has a better UI and is less flakey than F-Spot, which was good for its time, but not up to the task now. I also tried to use Darktable — as much as I might like its interface, its workflow was good for editing, but to export a photo took standing on my head.

Mac OS: Like a lot of linux applications that have been ported to Mac it unfortunately does not work. On start up it opens several copies of the same window, which there should obviously only be one of. Then crashes when trying to go into the filesystem to open files. Gave it 2 attempts: crashed both times. My guess is it's probably Apple's fault for doing something weird, but I could be wrong.

Also on their website instead of having an obvious link where to download is, there is a paragraph long explanation about how they used to be hosted somewhere but now they aren't so click a link for something else and navigate to the place where the downloads are. The story indicates it has been like that for 9 months. Why not adhere to convention and create a link called "download"? Or link to the download in the story about prior hosting arrangements? Describing how to find a link is very weird. 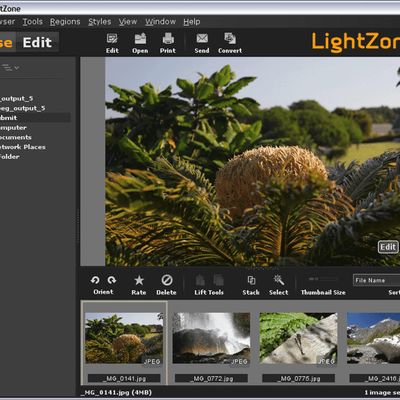 Our users have written 3 comments and reviews about LightZone, and it has gotten 33 likes

View all
LightZone was added to AlternativeTo by gyorgyjano on Apr 21, 2009 and this page was last updated Jan 27, 2021.