Free Pascal is a GPL'ed compiler that runs on Linux, Win32, OS/2, 68K and more. Free Pascal is designed to be able to understand and compile Delphi syntax, which is of course OOP. Lazarus is the part of the missing puzzle that will allow you to develop Delphi like programs in all of the above platforms. Unlike Java which strives to be a write once run anywhere, Lazarus and Free Pascal strives for write once compile anywhere. Since the exact same compiler is available on all of the above platforms it means you don't need to do any recoding to produce identical products for different platforms.

Lazarus is completely API independent. Programs could be compiled against Win32, GTK2, Qt, Carbon, FpGUI and more custom drawn widgetsets. With GTK2 and Qt for Windows supported as well.

Since first stable release (v. 1.0, August 28, 2012) improvements are really fast. Good community support. Yes, it's not as mature as Delphi but:

If You need a free and stable RAD give Lazarus a chance. Lazarus Team did a great job.

I've been a Delphi programmer since Delphi 1, and I have been using Lazarus for a few years now. Yes it has it's limitation (it's cross platform - so you're more so talking about the limitations of what several platforms share or not, or handle in a similar way), but consider this;

Granted ... it's probably not for everybody ... but I think it's great!

Could be a good thing if they work out better with interface. But right now it just unusable with all that Delphi 7 like mess with windows. They should implement MDI TDI interface...

Delphi is a computer software that is made to learn and focus on what you would build a project for;

Lazarus-IDE eventually breaks this focus in order to understand range of Open Source concepts, on which project advancements are not already built on the Lazarus Tool or forced into the open source logics;

There is a list of IDEs that list C# as alternative, yet it's not an IDE. VS, SharpDevelop and MonoDevelop - those are C# IDEs that are alternatives. While C# is alternative to languages - Pascal, C++, Java etc

I agree. This site is becoming less organized and accurate. It seems like users with a "dog in the fight" are adding their product as an alternative to everything just to drive traffic to their product...

Things keep improving, but very slowly. Still no fully Integrated Development Environment. There are few options, but all 3 main options are incomplete - GlassDocking does not ingrate Form Designer and does not save tabbed panels, KzDesktop does intergrate it, but does not have customizable panels. AnchorDocking is even less featured than GlassDocking. No separate interface settings for debug and development. No Welcome Page as well. Still no cross-platform capabilities out of box. CodeInsight is very primitive, reminds more of Delphi 7. Personally I can't live now without Delphi's CnWizard's Code Competition. It much more superior. Not talking about Visual Studio's IntelliSense. It appears also community support isn't good enough as well, since most of popular mods, like CnWizard and GExpert doesn't get ports or even integrated. If developers want their thing to be popular, then they have to work mod developers and help them to port or integrate their features into Lazarus. But it seems it doesn't happen. No Component/Mod Portal as well - it needs to have something where developers could publish their componenents and mods with ability to search and install them right from Lazarus. There is a third-party destro of Lazarus called CodeTyphon. It has most of most popular components and mods in its bundle, which helps the situation for newbies somehow. It's just slight view. Haven't been digging deep into debugging, deployment etc.

Lazarus great. It is easy to create a first application with the graphical form editor, and thanks to the elegant Free Pascal language it generates fast and efficient code for several operating systems (including Linux, Mac and Windows) and processor architectures (Arm, Intel, PPC and others). Therefore, Lazarus is the first choice for cross platform development. 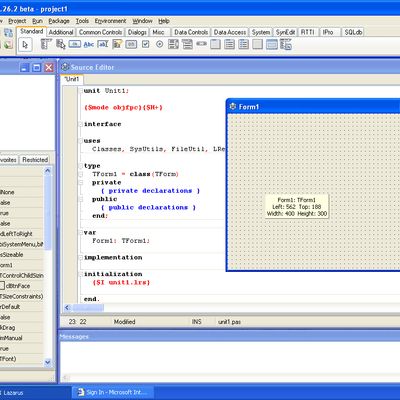 Our users have written 7 comments and reviews about Lazarus, and it has gotten 119 likes