What is Kreative Recode?

Kreative Recode is a utility for converting text files between different text encodings and performing various transformations on text files or any arbitrary piece of text.

Some common and not-so-common operations that Kreative Recode is capable of, along with detailed instructions, are:

Convert text files from Windows-1252 encoding to UTF-8 (or from any encoding to another). Convert UTF-8 text mistakenly interpreted as ISO-Latin-1 (or any other encoding), e.g. from web pages, back into Unicode. Perform ROT-13 on a piece of text. Replace Unicode characters in an HTML file with HTML entities. Perform a character frequency analysis on a piece of text. Convert Deseret or Shavian text from the old CSUR encoding to the accepted Unicode encoding. Convert Tengwar or Cirth text from the 1998 proposed encoding to the updated 2001 proposed encoding. Convert X-SAMPA (or CXS) text to Unicode IPA characters (or vice-versa). 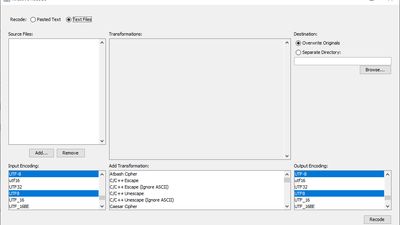 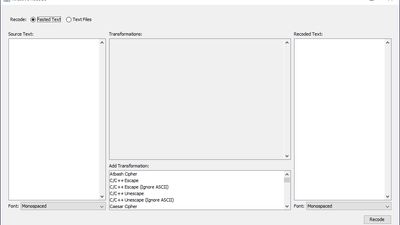 Our users have written 0 comments and reviews about Kreative Recode, and it has gotten 1 likes

View all
Kreative Recode was added to AlternativeTo by sandaliero on and this page was last updated .