Inveezy is a free invoicing tool for small business owners, especially freelancers on the go. It requires no login and no sign up. It is 100% free to send invoices with. It is the easiest and most comfortable invoicing experience out there.

Can I get PDFs of each sent invoice or download all my sent invoices?
As soon as you send an invoice with Inveezy we e-mail a PDF of that invoice to you and to the recipient. In that same e-mail there is a link to have all your invoices e-mailed to you in one zip file.

Can anyone see my invoice since there is no login on Inveezy.com?
No! We have encrypted each invoice link with a random hash identifier so that only you can see it. However, if you forward one of your invoices on, then the person receiving the link to that particular invoice will be able to see it. This is one of the advantages of Inveezy.com - it allows you to share invoices with a simple link.

How do you make an income from Inveezy.com?
We have a revenue share agreement with PayPal and make 7% of the 2.9% PayPal charges for using their service. We make 1% on top of each invoice paid with credit card.

Can I change the Inveezy logo to my own?
Yep! Just click it and upload your own.

Is Inveezy.com secure?
Yes. We have SSL installed on Inveezy.com with 2048 bit encryption. This means all the data travelling to and from Inveezy.com is encrypted - secured. We also implement further encryption measures such as hashing all our PDFs and Invoices.
Show full description ▾

I've started using inveezy for recurring billing and it's working great! I am able to send yearly invoices and one time invoices and then FORGET about it. It just does it for me. I love inveezy and I'd highly recommend it over Freshbooks since it costs so much less. Give it a try! You'll love it!

The year was 2015, and our founder Ted Fuller was trying to login to his online invoicing website - Freshbooks. First, he had to remember the link to his Freshbooks account, and then the password. You'd think it would be easy, but the Freshbooks link wasn't easy to remember. It was long and cumbersome.

The second problem was remembering the password. That should be easy too, but it wasn't for Ted since he had at least 5-6 different passwords for his web design business.

In addition to these problems it cost him a whopping $30 dollars per month for the use of Freshbooks. He could understand paying for mailed out invoices but He didn't understand why Freshbooks needed to bill for simply e-mailing invoices.

Going online, Ted tried looking for an app that was easy to use, free, and could handle both his quoting and invoicing for the websites he designed and hosted.

Although there were a lot of "free" invoicing apps out there like Wave, what was interesting to Ted was that there was no major platform that didn't require a password and did not charge monthly for some required service or another. There was always some sort of twist - upgrade this, limits to the number of clients, etc. Pretty vital features in question. Nothing was absolutely free to use like Gmail is today.

So, since it was 2015 and anything seemed possible at the time, Ted decided to quit his previous gig and start an online invoicing and quoting website... and Inveezy.com was born!

The original idea was to create a website that offered the absolute easiest invoicing platform without all the hurdles previously mentioned. Ted was able to eliminate the need for a password by simply having his invoicing system become e-mail-centric. He also made sure the Inveezy website was easy to remember or google. So he came up with the name "Inveezy" which is a play on "Invoicing" and the word "Easy". And he eliminated the unnecessary monthly invoicing fees that most companies dictated.

Over the past few months Inveezy.com evolved, and in addition to offering the best in invoicing, Ted added a simple quoting feature to the website so that he could truly move away from his current invoicing setup.

Now Ted's focus is on acquiring new users on Inveezy.com. To this end, He is touting the benefits of using his app and has a vision to make it the most used quoting and invoicing tool.

He's worked out an arrangement with Paypal and Stripe to use their services so people can have their invoices paid by credit card one-time, daily, weekly, monthly, yearly, etc. He's also setup post-dated quotes and invoices for those wanting their invoices sent at a later date. It's all built into a surprisingly simple interface that looks just like an invoice! Go figure!

Ted really believes that Inveezy.com will beat the competition simply because it is ridiculously easy to use and not hard on the pocket book.

Where other companies have just tried adding features upon features, Ted believes his simple approach will give everyone pause.

Take a look and try sending a quick invoice to yourself by going to inveezy.com. 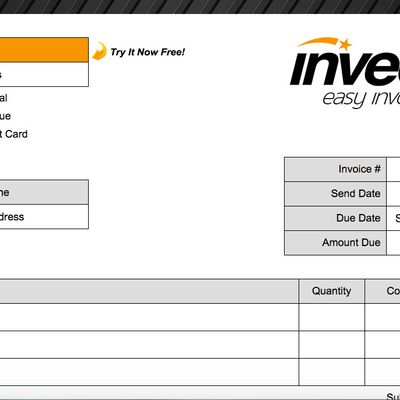 Our users have written 2 comments and reviews about Inveezy.com, and it has gotten 1 likes

View all
Inveezy.com was added to AlternativeTo by tedfull on Aug 20, 2015 and this page was last updated Nov 6, 2020. Inveezy.com is sometimes referred to as Inveezy.