What is Greasy Fork?

Greasy Fork is a free site providing user scripts to improve your web browsing experience. Greasy Fork is aiming to become the premier user script site after the collapse of userscripts.org, with the biggest audience for your scripts.
Show full description ▾

Loved and used greasyfork for years (ever since 2014), and used it and recommended it heartily.

However, something has suddenly changed with greasyfork, recently I've been getting a ton of automated emails from their staff and a lot of automatic moderation is suddenly taking place.

I had to open a support case and repeatedly argue with one moderator that my script isn't infringing copyright of my own script.
It was banned, then later I was called "stupid" as it was unbanned, and then a few days later it was banned again.

The following week, scripts of mine were deleted and the script url was pointed (301 redirect) at completely different code run by a random account, which means the users of my scripts are being redirected to update to a random script by a random account instead.
I saw this occur on my hosts and my wife's computer, automatically opening a new window instructing to update/reinstall code from a random account.

I'm immediately rehosting my scripts on another host and removing the scripts on our computers that have anything to do with userscripts.org

I just wish I could do the same, or at least warn the users of my scripts.

Massive security implications from this.

Do not use greasemonkey.org anymore, it's become a dangerous place to host, and it's clear the staff there have lost the plot.

Said about Greasy Fork as an alternative 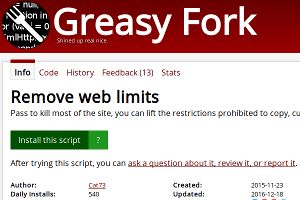 Our users have written 1 comments and reviews about Greasy Fork, and it has gotten 22 likes