Figure makes it easy to create great-sounding music in seconds.

Create an addictive beat before the barista brings your coffee or lay down a beefy bass line while waiting for the bus to arrive.

Figure is intuitive enough for beginners to make music within seconds, yet deep enough for you to get lost in endless play on a transatlantic flight.

Simply slide your finger across the play pad to record and tweak catchy drumbeats, memorable melodies and fat bass lines. Just bring your inspiration and Figure will help you take care of the rest.

• Sounding like a pro has never been this easy.
• Explore the world of music-making with no experience required.
• Create complete songs with drums, bass and lead melodies.
• Compose and experiment by sliding your finger across the play pad.
• Never play a bad note – Figure keeps you in key, and on the beat.
• Add cool and exciting effects to your songs with easy XY-automation.
• Tweak and manipulate your song on the fly.
• Share your original creations to iTunes® library.

I've used this application, but haven't updated it recently since I'm stuck on an older version of iOS. I'm at whatever version it is when they added the "Pushing Squares" lead, so I base my experience off of this version.

This application is pretty good. Making music really is quite simple with it. Figure's focus is on electronic music and making loops of music (which implies 4/4 time signature music), from 1, 2, 4, or 8 bars. You have a lead, a bass, and a drum machine to work with. You can change the rhythm pattern (16 different default patterns; 4 would be a note every quarter note, 8 would be a note every eighth note. Numbers in between would be some syncopated pattern. Of course, you don't HAVE to follow the pattern; you can make whatever beat pattern you like), the scale that you use, the steps in the scale, the range of notes that you can play (up to 3 octaves), and, of course, the type of instrument that you want to use. After you make a certain beat that you like, you can add some effects to it as determined by the instrument you have, such as changing frequency and resonance of your bass line.

Now, if you were looking for an application for some serious music making software, Figure isn't exactly that application. It's more for jotting down an idea that you randomly have on the go. However, don't take that to mean that Figure can't handle serious music making! There are moments where I had lots of time and spent hours messing with Figure. Over the years I've made plenty of music loops, some of which I'm quite proud of.

One of the flaws of Figure, however, is that it cannot export to MIDI. Although there are many options to export to other apps on your phone, I do not think MIDI export is possible.

with this app you can make rather good sounding music with no knowledge of music theory. 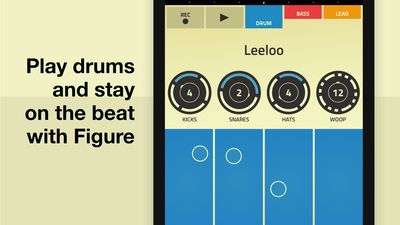 Our users have written 2 comments and reviews about Figure, and it has gotten 8 likes