The CryptoLoot JavaScript Miner allows you to embed a Monero (XMR) miner directly into your website. The miner itself does NOT come with a User Interface! It is your responsibility to tell your users what's going on and to provide stats on mined hashes. Ultimately, we aren't going to tell you how to run your business.
Show full description ▾

DecentralizedBased on a decentralized infrastructure with no single entity controlling it.

Beware of this scam! I chose Cryptoloot after Coinhive closed because they had quite similar integration, so it was easier to move. I even made a mistake of recommending it to several people...

It seemed quite OK at first, although the UI miner crashed a lot. But then I tried to ask for a payment (had 1XMR+ generated). Nothing happened so I contacted them. After second time contacting they just replied "your shares are fake" and banned me. Now when I open the site I see:

If I was really hacking they could've banned me before I asked for the payment. But no, they waited to get as many hashes from me as possible and only when they needed to pay they slammed the banhammer.

I've earned A LOT XMR on Coinhive before they closed, never had a problem with them. And Cryptoloot just banned me as soon as I requested for payment, with no reason and no explanations. Just later have I found that there are more people like me - who get banned right after asking for a payment.

Again, beware of Cryptoloot scam! All positive reviews online are probably written by themselves so don;t fall for it.

I write this review because I'm frustrated for the stolen XMRs and also to undo the harm I've done by recommending this scamhole of a website to others without actually making sure they pay.

**DO NOT JOIN THIS WEBSITE **
They are thieves, i used this website and i reached the million hashes and when i came to payout they banned me .

Attention now are: crypto-loot.org
The only excuse of the tim, he dominated the domain.
Then absolute silence.

I had a very bad experience with them. Never paid on time. Very high fees and my site was blocked by many antiviruses. I lost many users that was browsing on my site. You should not use this service at all.

Overall, a bad experience. The pay rate for fees is quite high; feels like a scam for me. Not recommended.

Crypto-Loot charges high fees and their Payout per 1M Hashes is quite low! 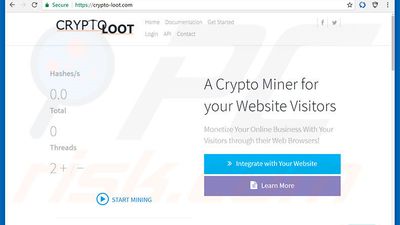 Our users have written 7 comments and reviews about Crypto-Loot, and it has gotten 3 likes

View all
Crypto-Loot was added to AlternativeTo by matheusrv on Nov 21, 2017 and this page was last updated Nov 25, 2020. Crypto-Loot is sometimes referred to as CryptoLoot, Crypto Loot.