No ads, no root required!

This app shows (live-capture) and tracks all current internet (ipv4 and ipv6) network connections on your phone/tablet - graphical. It reads the data from the same location as the famous netstat-tool (network statistics / network (internet) connection monitor), but optionally with tracking mode as small and efficient background-service with minimal CPU and power consumption. And: you can export all the data as CSV-File to Excel or LibreOffice.

With this Tool, you can monitor every app, if it connects to the internet: when, how often, to which servers... You can also check, if there are any listening network sockets (open ports/servers) on your device. Spyware, malware and all other ugly apps with heavy connection loading will be unmasked.

Fields available in live-capture network monitor and in the export-file:

You can run this app as a background-service to track connections, and to quick view open connections at the notification area.
Show full description ▾

So now as from Android 10(Q), Google have decided to prevent any applications from accessing proc/net . This issue was discussed here ..
https://www.xda-developers.com/android-restrict-apps-monitor-network-activity/

I have tried 'Connection List' on a rooted phone on Android 10 and still am unable to view TCP connections. This is a security flaw as previously if I had installed a malicious app I could see its connections, instantly and then uninstall and find an alternative. This meant I didn't have to run a firewall or any other bloated app and, was more informed about the software I was running. Now it is like using Android blind. There's a huge amount of remote connections made by Google Play and connections to third parties by even many paid for apps. Do you know what data is being scanned on your phone and whether it's being sent to third parties? Contacts, photos, phone/text conversations. 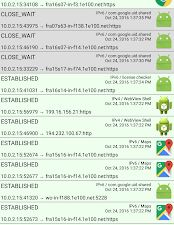 Our users have written 1 comments and reviews about Connection List, and it has gotten 0 likes

View all
Connection List was added to AlternativeTo by YoWhassup on Jul 7, 2020 and this page was last updated Jul 7, 2020.