Code::Blocks is a free C++ IDE built to meet the most demanding needs of its users. It is designed to be very extensible and fully configurable.

An IDE with all the features a developer need, having a consistent look, feel and operation across platforms.

Built around a plugin framework, Code::Blocks can be extended with plugins. Any kind of functionality can be added by installing/coding a plugin. For instance, compiling and debugging functionality is already provided by plugins!
Show full description ▾

Code::Blocks feels like an IDE that came straight out of the 90s – and I like it for just that reason. From the GUI to project and build management, it feels very old-fashioned through and through. And the truth of the matter is, a lot of things were actually quite a bit better in many respects, back when they were simpler.

I like working with fancy IDE monsters like Visual Studio, Eclipse, or IntelliJ, too. But for all the comfort those solutions add, they also add layers over layers of complexity. That can quickly turn into a problem as soon as you want to do something slightly differently than the "official" workflow suggests, and chances are usually that you'll want to, sooner or later. Then, managing and fixing project configurations and build setups can turn into an endless time sink.

Code::Blocks keeps things close to the basics, not messing with your code or file structure unless you ask it to. It's simple, it's light-weight, it keeps your projects portable. That is a very valuable quality, as everybody who is not married to a single framework or IDE can attest. The code I write should be entirely mine, and Code::Blocks puts that principle at the top-most priority.

The good thing is that the IDE is used and worked on by many real and active developers, though, so it will still integrate with a lot of tools and modern concepts. From documentation generators to static code analysis, you can configure it to use many more modern and genuinely useful helpers. It's as if the spirit of C++ development in the 90s lived on, adopting carefully selected paradigm shifts over the years, but not giving up its original soul.

Don't dismiss it as a toy that couldn't possibly compete with major-vendor IDEs. It doesn't want to, and it doesn't need to. It's a very good C++ development environment for the programmer who couldn't care less about the hypes and the buzzwords, and just wants to get something done.

Code::Blocks is a very light but powerful IDE

Mature and easy to use

Its a very good site. I searched fot others sites, but anyone said me what I wanted
My congratulations 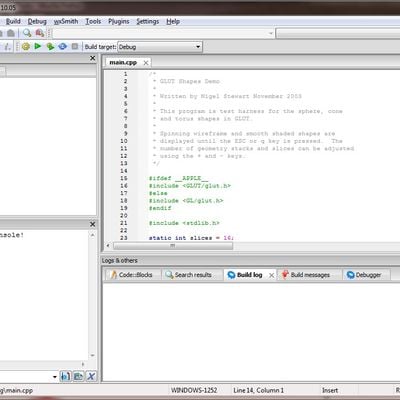 Our users have written 4 comments and reviews about Code::Blocks, and it has gotten 248 likes

View all
Code::Blocks was added to AlternativeTo by kn on Apr 19, 2009 and this page was last updated Jan 27, 2021. Code::Blocks is sometimes referred to as Code Blocks, CodeBlocks.