BugMeNot is an internet service that provides usernames and passwords to let Internet users bypass mandatory free registration on websites.
Access and share logins for websites that require you to register in order to view content.
Show full description ▾

No signup, no login/account needed. Simple and clear interface.

Great idea - I love this service! It really helps to test a new online service without having to dummy-register yourself.
Best used with the Firefox Add-On

The whole service has become useless, as all you get to see nowadays is “This site is blocked.“.
At first they still used “reasons”. Like accounts where you could spend money. … As if anyone who shares his login with e.g. credit card data wouldn’t deserve exactly what he’d get for being that stupid. … Hell, as if anyone would even do that in the first place!
Nowadays, even sites where you couldn’t possibly buy anything (like pure blogs) are blocked.

Giving sites with such policies the middle finger was the entire damn point of BugMeNot!

Thanks to their jellylike spinelessness it has become completely useless and pointless.

If you’re looking for a similar service that actually does its job, or looking to create such a service, make sure it’s not hosted in a country where they are allowed to harass and bully such services with such frivolous lawsuits! 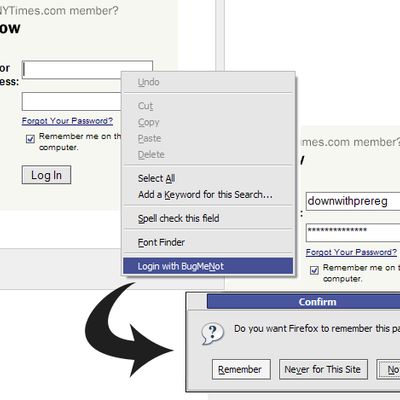 Our users have written 3 comments and reviews about BugMeNot, and it has gotten 56 likes