What is Blood and Glory?

NOW WITH THE NEW DECAPITATOR WEAPONS!!! PLUS EARN MORE REWARDS FOR HAVING MORE GAME CENTER FRIENDS!!

THERE WILL BE BLOOD…
Some have come to witness strength, others to witness courage, but all have come for BLOOD & GLORY

Battle in the arena and entertain BLOOD-thirsty crowds in a fight to the death. Here, GLORY is the only option…

SWIPE & SLASH GORE
Take to the Arena in the bloodiest, goriest swipe and slash fighting game on app store

Blood & Glory is free to play, but you can choose to pay real money for some extra items, which will charge your iTunes account. You can disable in-app purchasing by adjusting your device settings.
Show full description ▾

This is basically a copy from Infinity Blade, but free!

The graphics, animation and "feels like" are all very similar and quite good.

Now, there are many down sides (given I never bought anything in game). The main issue, as I see it, is the game's goal. Free games also have to choose how they'll be able to sustain being free. Most will try and fail with ads. Some will sell in game decoration, basically a token for a donation. Others, like this, will try to make the game frustrating and sell you good stuff for easier or better playing experience.

So:
<br />- as said before, we can't buy the good stuff through game play only
<br />- it doesn't have as many nuances on game play and graphics
<br />- the scenario never changes and is far from being as pretty
<br />- game play development is non existent and it's difficulty curve is more like a bad repeating line


Bottom line, I don't like playing it for too long after playing Infinity Blade. 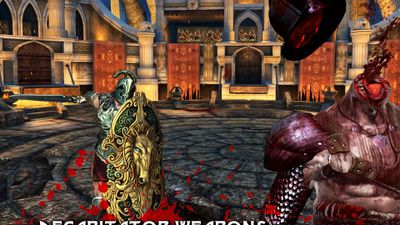 Our users have written 1 comments and reviews about Blood and Glory, and it has gotten 0 likes