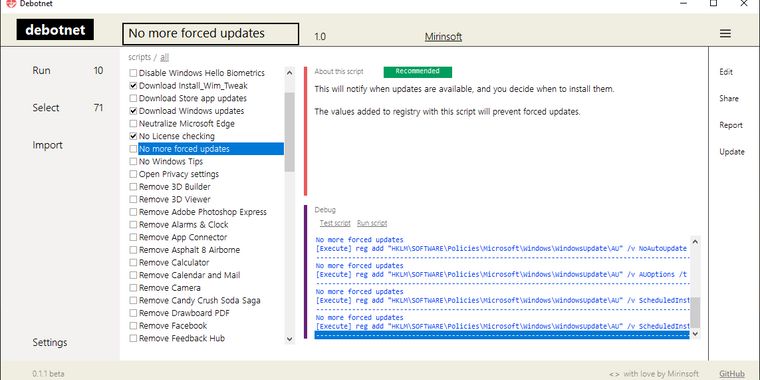 For many, Windows 10's lack of easily accessible privacy protection measures makes it a less-than-ideal upgrade from

Windows 8, especially for those who are privacy conscious. However, in the wake of this situation, coupled with the ubiquity of the Windows operating system series for PCs as a hardware platform, many third party utilities have been developed in order to bring the tracking and monitoring that is present in

Windows 10 to be much closer to the likes of Windows 7 without compromising on the upgrades that otherwise define Windows 10.

The latest of these privacy tools comes courtesy of Mirinsoft, the developer of

CloneApp. The tool is called

Debotnet, and its main goal is to be a lightweight and easy-to-use way for Windows 10 users to disable any built-in software or features that are otherwise extremely difficult to modify in any way. This includes the ability to easily disable

Cortana, which was hidden after the Windows 10 Anniversary Update.

Debotnet's user interface is split into 3 separate columns, with the first column allowing you to import, select, and run scripts, the second column listing the scripts that modify or remove the apps or behaviors of your choosing, and the third describing what the currently selected script does in a detailed manner, oftentimes with the needed

PowerShell commands that will be run to ensure that what you've selected is done.

Debotnet is a free and portable tool for controlling Windows 10's many privacy-related settings and keep your personal data private.