Every product has some gripes that could be improved.

The gripes could be things like broken flows, unintuitive UX behaviors, or some interactions being too slow - you name it. Everybody has their favourite products, and each of those products (awesome as they may be) have a couple of small things that could be improved to make them even better.

According to one study[1], only 4% of people ever actually tell the business owner what's wrong with their service before moving onto the competition! Complaints therefore should be encouraged as much as possible and can make the business really stand out.

This is the reason behind Gripeless, an all-in-1 solution to make the process as smooth as possible for the user so that they don't have to write emails, don't have to think whether the product-owner is acting on those complaints or even requesting complaints in the first place.

Gripeless can be installed onto any website - the provided script is only 20kB gzipped it performs really well even on the slowest devices. 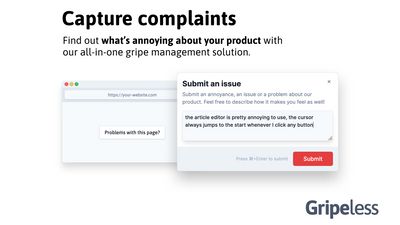 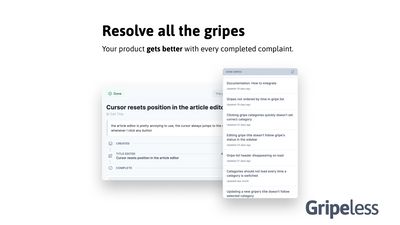 Our users have written 0 comments and reviews about Gripeless, and it has gotten 1 likes

View all
Gripeless was added to AlternativeTo by nikersify on and this page was last updated .