What is Epic Inventor?

I have said a few times that Epic Inventor was inspired by Terraria. There are obvious similarities you can see right away in the various screenshots I’ve posted. Certainly our desire to create a game was inspired by it as well. We love that game. We played it a lot.

For me, I wished there was more to it – or more to do beyond what was there. The immense amount of time I spent playing Minecraft probably shortened my attention span for Terraria when it comes to the creative aspect. I have a game (Minecraft) that I use to let my creativity run wild in and in Terraria I was looking for something a little different after 100+ hours of playing it.

One of the things that my mind latched on to right away was the potential of NPC’s. The game had 6 NPC’s that will congregate to “houses” you make once certain conditions are met. These are, for the most part, merchant NPC’s who simply have items for you to buy. What I started imagining was just how many different NPC’s you could have. For example, Soldiers, Archers, a King, and more. Of course, the next train of thought was that you would need to make specific buildings for these people, which would be great. Make me build an entire city, I want to!

Of course, you CAN build a series of buildings and create your own “city”, but I thought, I want these creations to have a purpose. I don’t want the buildings to simply be a waypoint for NPC’s, I want them to benefit me in some way. I want to actually WANT to defend them.

That’s when my days of playing Age of Empires came to mind.

Thinking in terms of Terraria, I started asking myself questions letting my mind take me to ideas that I thought I w

In October 2013, development stopped the sourcecode is available on Github. In May 2016 developer is thinking about revisit the project

The developer is thinking about revisit the project with a modern game engine such as Unity and he is looking on Twitter if there are enough EI fans excited about in order to continue. 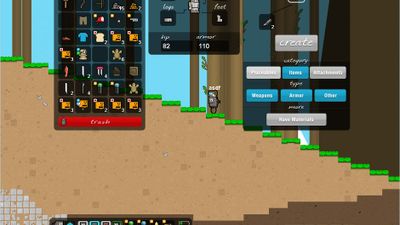 Our users have written 1 comments and reviews about Epic Inventor, and it has gotten 10 likes